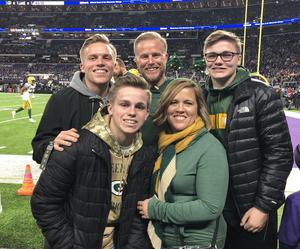 Along with Valentine's Day, it's National Organ Donation Day-- the perfect time to recognize a De Pere staff member who gave the ultimate gift.
Jen Engel, De Pere Middle School health secretary, did not choose to donate a kidney because a family member was in immediate need, or in response to a desperate plea posted by a stranger on social media.
For Jen, the process started last spring when she read an article about “non-directed” living kidney donations. As the term implies, a non-directed donation means the organ recipient is neither named nor specified by the donor. In other words, non-directed donors like Jen give an organ to a stranger; they know neither the identity nor (usually) any characteristics of the recipient before their donation. Less than 5 percent of living kidney donations are non-directed, according to the US Dept. of Health and Human Services.
“The article piqued my interest, so I filled out a form asking for more information. The more I learned, the more I knew I wanted to donate,” she says.
At any given time, there are more than 100,000 people waiting for kidney transplants in the US, according to the National Kidney Foundation. On the average, over 3,000 new patients are added to the kidney waiting list each month, and 13 people die each day while waiting for a life-saving kidney transplant.
According to Tranplant At University Hospital, the University of Wisconsin’s world-class organ transplant center, transplanted kidneys from living donors – related or not-- out-perform kidneys from deceased people by virtually every measure.
Non-directed donors often start kidney exchange "chains” that result in more transplants. Like Jen, many non-directed donors choose the option because it is a way to help more than one person suffering from kidney failure. One chain typically facilitates anywhere from 2 to 30 transplants. In Jen’s case, her kidney went to the best match on the waitlist at another transplant center that participates in the National Kidney Registry, and she is aware of at least four other donations that occurred as a result of her non-directed donation.
Jen chose to go through lengthy, rigorous physical and psychological testing, and what she calls the “somewhat uncomfortable” surgical kidney removal last July at UW, she says, because “it was something I could do to make a difference. I did a lot of research and learned more about the program. I spent a lot of time talking with my husband and my sons. Not everyone can donate due to their own health conditions, their current life circumstances or other issues. But it turned out, after a lot of testing, I could. So why not pay it forward?”
She was home two nights after her surgery, returned to work after 4 weeks and was back to “feeling completely like my old self” after about 8 weeks. Like other organ donation programs, the recipient’s insurance paid all costs associated with the medical testing and related procedures. Funds are available from other organizations to cover ancillary costs such as transportation, lodging and more.
“It just wasn’t really a big deal, physically. Going forward, I shouldn’t be playing tackle football,” she adds with a laugh, “but other than that, having some occasional testing done and just staying healthy are the only lasting physical impacts.”
The emotional impacts, however, will last a lifetime. “I don’t want or need to know who received my kidney, or the other kidneys donated down the chain. I just feel peace knowing there are people who will live to see another birthday, celebrate another holiday with their families or simply have time to live their lives without having dialysis procedures every week. It feels good to know I could help make that happen.”
Engel’s donation is not the first made by a De Pere Schools staff member. In 2012, teacher Lynn Liddle-Drewiske donated a kidney to her fellow teacher Kris Weaver, orchestra director at Foxview Intermediate School.
For more information on National Organ Donor Day, visit:
https://www.organdonor.gov/
For more information on kidney and other organ donation, visit:
https://www.uwhealth.org/transplant/transplant/10355
https://www.kidneyregistry.org/
https://www.kidney.org/